Many situations can complicate a shoreline’s integrity. These can range from flooding, hurricanes and man-made disasters and can even include aquatic harvesting and human recreation. Making efforts to protect a shoreline from these intrusions helps protect economic and recreational interests. Shoreline remediation is an investment in the overall economic and natural habitat of a community.

As defined by the Erosion Control Technology Council (ECTC), Sediment Control is A practice that captures soil particles on site that have been detached and moved by wind or water. While different methods and practices are used when it comes to shoreline remediation and sediment control we will examine a specific method, dredging and shoreline remediation.

Let’s look at the Southwest Mordecai Ecosystem Restoration Project or “SWMER”.  According to the SWMER Project Scope, “The SWMER Project focuses primarily on several rapidly eroding areas on the southern rim of Mordecai Island. 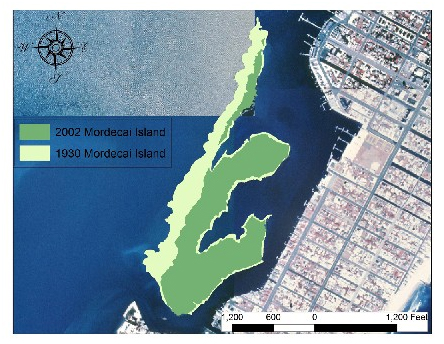 SWMER complements Mordecai Land Trust’s wave barrier project with the Army Corps of Engineers which involves the planned installation of a barrier off the western coast of Mordecai north of the SWMER area.”

The SWMER project required careful planning on the part of Mr. Jim Dugan, President of Pond Recovery Services of Hainesport New Jersey and contractor for the SWMER project.

Jim Dugan has owned and operated dredges for many years and has used them in conjunction with Geotubes for the purposes of shoreline remediation. He has contracted his restoration services throughout New Jersey and surrounding waterways including the Chesapeake Bay. President of the Mordecai Land Trust, Jeffrey Hager, wrote of Jim Dugan, regarding the SWMER project, “He (Jim Dugan) proved to be an extremely competent and conscientious field manager,…”

Jim Dugan describes the SWMER project as a material handling challenge.  “We had to move 900 tons of sand to an island in the bay.” As described in the Mordecai Matters Newsletter, Winter 2010 issue, SWMER involves the installation of close to 600’ of huge sand-filled fabric tubes called Geotubes, slightly off the south-western edge of Mordecai Island. “The erosion has been severe here and the hope is to stabilize this fragile part of the Island and encourage the deposition of grasses and other organic materials between the island’s edge and the two long sections of Geotube.”

Jim explained that they couldn’t use the sand from the bay so they transported 900 tons of clean sand from a nearby quarry by truck. But how do you get the sand to the island?  “You have to pump it.” Jim said there were 2 major challenges involved.

Jim needed to use the water in the bay to mix with the clean sand in order to pump the sand underneath a navigation channel, across the island, and through floating line to the Geotube feed ports.  Jim needed a flexible solution. Since he was pumping downhill under a 15 foot channel, he couldn't risk shutting down with sand in the line. He used one of his Crisafulli dredges to act as a mobile sand pump to adapt to the wind and tide level fluctuations in the bay. The dredge would be flexible enough that his operator could adjust the articulating cutterhead height, angle and distance to the feed, thus keeping the sand-water mix at an constant rate. This also allowed frequent start-stop operation to flush the line and switch Geotube feed ports, thus filling the Geotubes evenly.

Jim used a hopper with a belt to deliver the sand to a sand spreader.  The sand spreader distributed the sand evenly to match the 8 foot wide dredge cutterhead.  The cutterhead mixed the sand and water allowing for an optimal pump mixture. 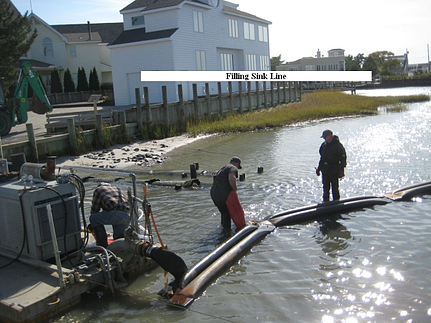 Using the dredge as a sand pump Jim was able to pump the sandy mixture up to ½ a mile directly into each of the geotube ports spaced 20’ apart.   “(This project) needed a lot of flexibility which the dredge allowed for” Stated Jim.

Watch video of the shoreline with the installed geotubes at Mordecai Island Geotubes in Action on YouTube.