SRS Crisafulli designed and built the self-propelled, steerable, diesel powered all-purpose dredge for both abrasive and soft slurries with a cast alloy pump, and 8” discharge, in the fall of 2013.  The dredge was tested at Fisher Sand and Gravel’s pond on Circle Highway northwest of the Company’s Glendive, Montana manufacturing plant, just before winter set in. 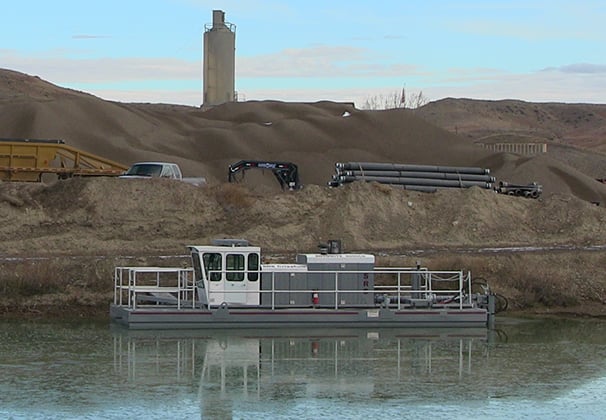 During the winter, the SRS Crisafulli Dredge Sales and Rental Department worked with a copper mine in the American Southwest on a Dredge Rental contract. The mine needed to restore their basin capacity without stopping mine processes, which is the perfect application for hydraulic dredging.

Problem: The customer has a plastic-lined tailings dam that collects outflow from various processing facilities. The mixture is generally acidic, with lye added to balance ph levels. A floating pump transfers water and material from this small catch basin into a very large permanent tailings impoundment. The limited ability of the floating pump to pull in slurry led to a build-up of solids, which reduced the pond’s holding capacity.

The customer wanted to restore this capacity to original levels without stopping any mine processes or damaging the liner.

Solution: The new SRS Crisafulli Rotomite model 6000CD was selected for its ability to handle abrasive tailings materials. The Rotomite 6000CD also proved to be well suited for pumping through 500 ft. of 8 in floating discharge pipe, 1500 ft. of 10 inch fused pipe, and over an 80 ft. berm at 1300-1500 gpm. No booster pump was required, reducing cost and complexity of the system. The cutterhead was outfitted with a liner protection cage, preventing its horizontal auger from damaging the liner as it pushed slurry into the pump. This cage restricted the auger from digging into settled solids, so SRS Crisafulli’s unique cutterhead articulation became indispensible as the primary method of breaking up material. 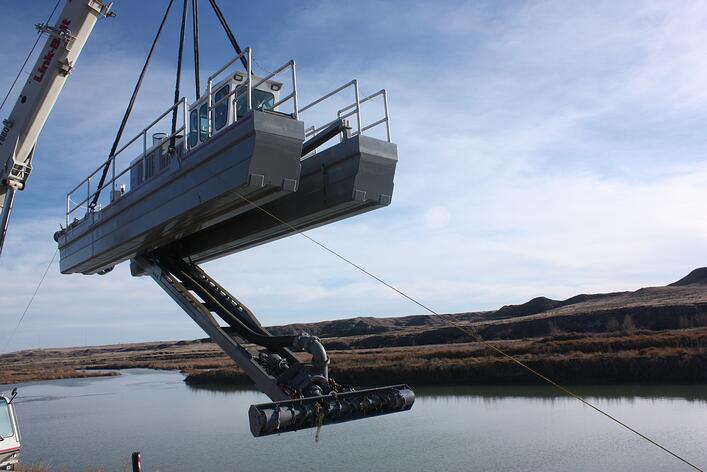 The hydraulic thruster on the back of the Rotomite 6000CD was also a critical component. Both the perimeter and floor of the basin are irregularly shaped, and it is surrounded by a fence, making cable positioning difficult and cumbersome. The thruster’s 180 degree range of motion and hydraulically variable depth allowed quick and easy positioning of the dredge during operation and docking.

The project began with an estimated 76,000 cubic yards of material to be removed.  A satisfactory quantity of tailings was removed to restore the impoundment’s capacity.

Thanks to the SRS Crisafulli dredge rental program, the copper mine’s project was completed in less than six months.

The inaugural season of the R6CD was a great success.

Please call the offices to schedule a rental for 2015, or inquire about an equipment purchase.