Proactive Dredging: A Little Now or a Lot Later

If public works departments had a list of fun things to do, dredging sediment out of holding ponds would not be on it.  It’s like cleaning the shower in your bathroom.  Whether you make it a frequent quick job or an occasional laborious task, time and effort must be set aside to maintain a fixture that is as critical as it is uninteresting.  This is the scenario that played out for Georgia’s Cobb County-Marietta Water Authority (CCMWA) during the summer and fall of 2010, as reported in Public Works Magazine.

CCMWA had two water treatment plants and a 25 million gallon reservoir in need of upgrade to meet the EPA’s Stage 2 Disinfectant and Disinfection Byproduct Rule of 2006.  During the upgrade, one plant would be running, one shut down.  The reservoir had to be at full capacity to do this.  Unfortunately, it hadn’t been dredged since 1978 and was half full of sludge. 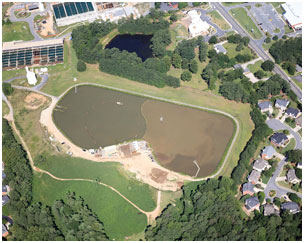 Timing of all the different upgrade stages coupled with the EPA deadline meant the reservoir had to be cleaned out in six months.  (The dredging had originally been scheduled to take place 2013-2014.)

In other words, the CCMWA had to make up over 30 years of maintenance in 6 months (that would be one nasty shower!).  The result: increased scale, decreased competition, and ultimately an increased cost.  The amount of dewatering equipment doubled.  Four mobile belt presses and four recessed chamber presses were used.  Fifty trucks made four 45-mile round trips per day.  Bidding on the project was limited to the few large contractors who were even capable of completing the project.  There were five bidders and all five of them listed the same two companies as their subcontractors.  Total cost to dredge the reservoir and perform maintenance on the banks and sluice gates totaled just over $4 million.

The World Dredging Mining & Construction Journal [1] contains a version of the article authored by Steve Gibbs.  It goes on to discuss some observations from the project:

One of the lessons learned by CCMWA is the need for regular dredging of the reservoir.  One benefit of regular dredging is economics – greater capacity in the reservoir reduces the amount of pumping necessary to bring water from the Chattahoochee, thus saving electrical costs.  Also, doing a smaller dredging project every five years or so will eliminate the need to do a massive project such as the one just completed.

There you have it.  Proactive dredging of sludge-collecting ponds really does make life easier in the end.  It also increases the options:

At least it’s something to think about while you’re cleaning your shower tonight.

Do you have a proactive dredging project in mind?  Fill out our dredge application form.

Many situations can complicate a shoreline’s...