Hydraulic Dredging: A cost effective solution for most dredging tasks 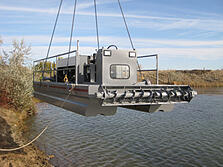 The vast majority of dredging jobs require removal of solids to depths of 30 feet or less. Several features enable hydraulic dredges to be the solution of choice for these applications.

First, what are hydraulic dredges and how do they compare with alternative mechanical dredge types?

Hydraulic dredges create slurries, combinations of solids and water, pump the slurries to the surface of lagoons, ponds, lakes, waterways, and canals, and then pump the slurries through floating and land based pipe to disposal sites. The hydraulic dredging process can be continuous, as contrasted to intermittent in the case of so-called clamshell dredges.

Basic components of hydraulic dredges include a cutterhead, pump, floatation system or platform, engine or motor, control system, and the discharge system. Cutterheads dig up settled solids in the waterway to be dredged and create slurries.  A powerful centrifugal pump mounted directly behind the cutterhead draws the slurry into a discharge piping system, pushes the slurry to the surface, and then to the discharge site, often thousands of feet away from the dredging site. The engine, typically diesel, or electric motor, by means of hydraulic motors and high-pressure hose, transfers the engine’s power to the cutterhead and pump, and in the case of self-propelled dredges, such as a Rotomite-6000, to the dredge’s propulsion system. Hydraulic dredges integrate the foregoing components into a balanced, highly productive and efficient system.

Hydraulic dredges are made in several configurations, all of which except for cutter/suction and spud dredges, and dredges that require a support vessel, are made by SRS Crisafulli:

Other types of dredges and solids removal systems are classified as mechanical and include:

Each of the foregoing three dredge types provide advantages and disadvantages, including:

Selecting the best dredge solution for any application requires careful analysis by experienced, well-trained people in collaboration with the customer’s staff. Frequently, such an analysis requires the efforts of engineers with the skills and experience to sort out the many variables.

I attended the Texas A & M University...