While I was traveling from Glendive, MT, where SRS Crisafulli is based, to New Orleans, LA, for Battelle’s 2015 Contaminated Sediments Conference, the EPA was making an emergency trip from its office in Colorado to Glendive to begin to deal with the Bridger Pipeline oil spill, before this also became a contaminated sediments problem.

This is a stark reminder that while many of these projects are long term, and have defined goals, there are emergencies that require immediate action.

At the Battelle Conference, the most unusual presentation came from Dr. Kent Sorenson, of CDM Smith. His client is the United States Agency for International Development (USAID); the site is the Da Nang Airbase, Vietnam. This airbase was used by the US military from 1959–1975. At the north end of the airbase, Operation Ranch Hand mixed, loaded, and stored 100,000 barrels of Agent Orange. The toxic Dioxin (2,3,7,8 – TCDD) is a component of Agent Orange, and was left behind, devastating those with prolonged exposure. The residuals represent the highest levels of dioxin in the world. The clean-up, which is happening now, is Thermal Conduction Heating under Vacuum Extraction, with insulated covers, and heater wells. The volume of material requiring treatment is 42,000 m3 of soil and 45,000 m3 of sediment.

Last year, USAID and CDM Smith received an Honor Award in Environmental Communication from the American Academy of Environmental Engineers and Scientists. The award recognized the public information and stakeholder involvement program associated with remediation of dioxin contamination at the Da Nang Airport in Vietnam.

“As we prepare to move and clean this ground, so have we moved mountains to bring the United States and Vietnam to this landmark moment,” said U.S. Ambassador David B. Shear. “We are both moving earth and taking the first steps to bury the legacies of our past. I look forward to even more successes to follow,” he added. Two U.S. companies, CDM Smith and Tetra Tech Inc., were awarded the contract for construction management and oversight of the entire project in coordination with the Vietnamese ministry.

Kent Sorenson’s presentation was focused on the technical aspects of the remediation, and he acknowledged the political and cultural environmental impacts as well. 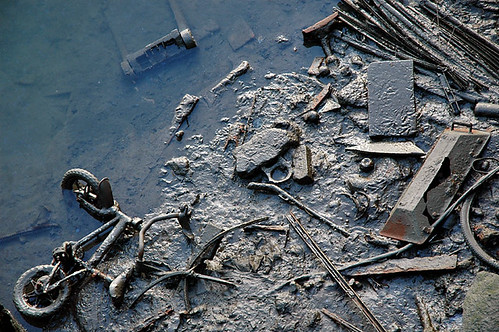 This NYC site was originally a shallow wetland that was an authorized fill site in 1849. There were 3 manufactured gas plants (MGP) plants which discharged into the canal, in addition to sewage.

From the late 1800's to the mid 1900's, hundreds of Manufactured Gas Plants supplied homes and industry with fuel for heating, cooking, and lighting. Today, the New York State Department of Economic Conservation, and others, are overseeing the investigation and cleanup of contamination left behind from these plants.

Brian Carr, Assistant Regional Counsel, U.S. EPA, New York, presented on the history and proposed Gowanus Canal cleanup. There was a Record of Decision (ROD) in 2013. (I had total acronym fatigue and confusion.)

The 100 page ROD document – the Record of Decision – outlines the $500 million cleanup which is now proceeding.  What are we cleaning? There are PAHs, PCB’s and heavy metals, including mercury, lead, copper and bicycles on their way out of the Gowanus Canal.

PAH: Polycyclic aromatic hydrocarbons. PAHs have been identified as carcinogenic and mutagenic (as well as teratogenic), and are considered pollutants of concern for the potency of potential adverse health impacts; the same holds true of their presence at significant levels over time in human diets.

PCB: polychlorinated biphenyl. According to the U.S. Environmental Protection Agency (EPA), PCBs cause cancer in animals and are probable human carcinogens, and they have been widely disbursed in the environment, way beyond the Hudson River, which we have all heard so much about.

This conference – the 8th – that Battelle has assembled on this topic was well attended. Organizers commented on the attendance of over 1,000 sophisticated project managers, scientists, vendors, contractors, and representatives of industry – Dow, DuPont, Honeywell, The Boeing Company – as well as the regulatory EPA, and the Scientific community from the Corp of Engineers.

Dr. Todd Bridges, Senior Research Scientist at the Research & Development Center of the US Army Corp in Vicksburg, Mississippi, was particularly outspoken, advocating for full and open deliberations within the Community of Environmental Remediation stakeholders.

Todd led a spirited review of decision making processes, and advocated that “sunlight is the best of disinfectants.”

The Conference’s closing roundtable panel addressed the question: Can Urban Master Planning Help Resolve the Cost/Benefit Impasse at Large Contaminated Sediment Sites. The panel told stories of reconnecting communities to their rivers, using design competitions and economic development projects to increase the values of the outcomes.

Yes, we will provide updates and comments on the impact of the January 17, 2015 Bridger Pipeline Yellowstone River oil spill on these pages in the weeks and months ahead.  So far, of the 50,000 gallons of oil originally believed released, responders have recovered more than 21,000 gallons from both the pipeline and the Yellowstone River.