Problem to solve. In Montana two neighboring Conservation Districts in the Big Sky State forged an innovative partnership. The Missouri and Yellowstone rivers deposit silt and debris throughout the year, and, even when there is normal water flow, irrigators need to clear away debris to use their pumps. The situation is worse in years of drought or low water level. Sometimes irrigators have to trench from their pump sites to the river to access needed water. Traditionally, this has been done with draglines and backhoes (and even dynamite), and the task has become more expensive and problematic each year. Excavated debris and silt was piled on riverbanks. The mounds created could even change the river patterns to create more silt problems.\ 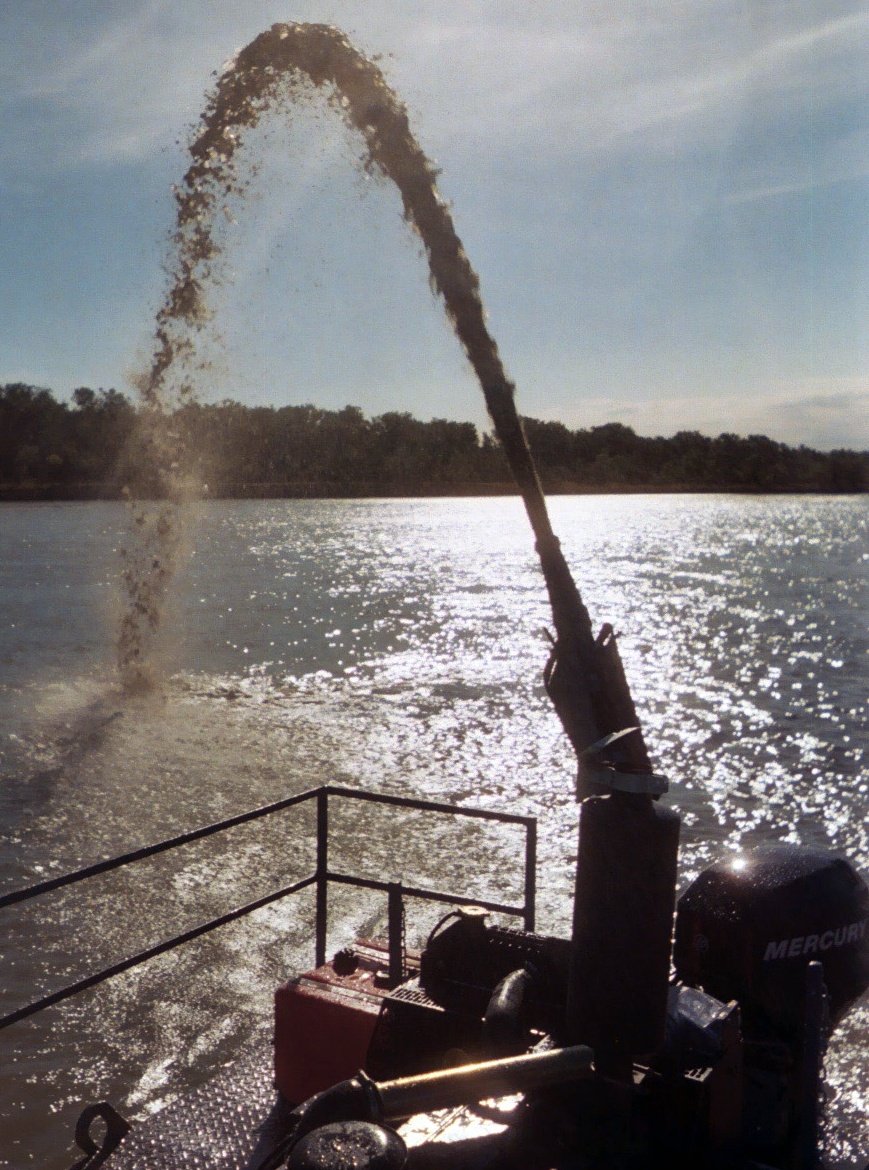 Solution. In 2006, the Richland and Roosevelt County Conservation Districts acquired a Rotomite-SD110 dredge from SRS Crisafulli. The decision enabled irrigators with property along the Missouri River from Fort Peck to the border, as well as irrigators who worked stretches of the Yellowstone River that flow through Richland County, to use a modern, environmentally friendly method to access the water.

Scope of Problem. There are more than 150 pump sites on the Missouri River from Glasgow, MT, to the Montana-North Dakota border, and almost 20 sites along the stretch of the Yellowstone in Richland County. In years of normal precipitation, these sites must be cleaned to be of any use to irrigators, and the problem is worse in times of low water flow. Local, state, and federal agencies were all interested in the solution proposed by the Richland and Roosevelt Conservation reaching available water from rivers is not confined to eastern Montana. There are many regions in North America with a similar problem that could be solved in a similar way. Silt and debris are natural problems for most rivers and streams; their efficient removal makes pumping good water much easier for irrigators Collaboration. “This dredge project is a good example of what Conservation Districts can do when they work together,” comments Vicki Marquis, watershed coordinator for the Missouri River Conservation District Council. “Federal, state, and local entities worked together to pull this off.”

Performance of Rotomite-SD110. The small, maneuverable Rotomite- SD110 dredge on the Missouri and Yellowstone Rivers cleaned about 70 cubic yards of dredged solids per hour, and disposed of the dredged silt and debris in a way that does not build large, potentially hazardous mounds on the immediate riverbank. “Many customers, such as municipalities, counties, and industrial entities, have their own people who can run a small dredge,” advised Mike Mills, director of engineering and manufacturing at SRS Crisafulli. “Most customers do not hire outside contractors to run the equipment. On river projects, knowing the river and its idiosyncrasies is a major advantage, and Counties and Conservation Districts use such people as temporary operators. It’s not difficult to run the dredge. SRS Crisafulli has hundreds of people worldwide who run its dredges successfully without having specific qualifications in dredge operation.”

Photo below shows channel dug by Rotomite-SD110 through the mud of the Missouri River to "rescue" a boat locked in the mud.

Opportunities. The potential is exciting. With more periods of drought forecast for many parts of the country, the ability to get water from available sources is of paramount importance. What frequently prevents those involved in agriculture’s multifaceted sectors from getting the water they need is silt and debris in the water. The example set by the two Conservation Districts in Montana could be the solution for many others in similar dry situations

Crisafulli Vertical Pumps.These are excerpts from a report prepared in 1998 by NORTHWESTERN POWER...